Be Curious, Not Judgmental: “What Were They Thinking? 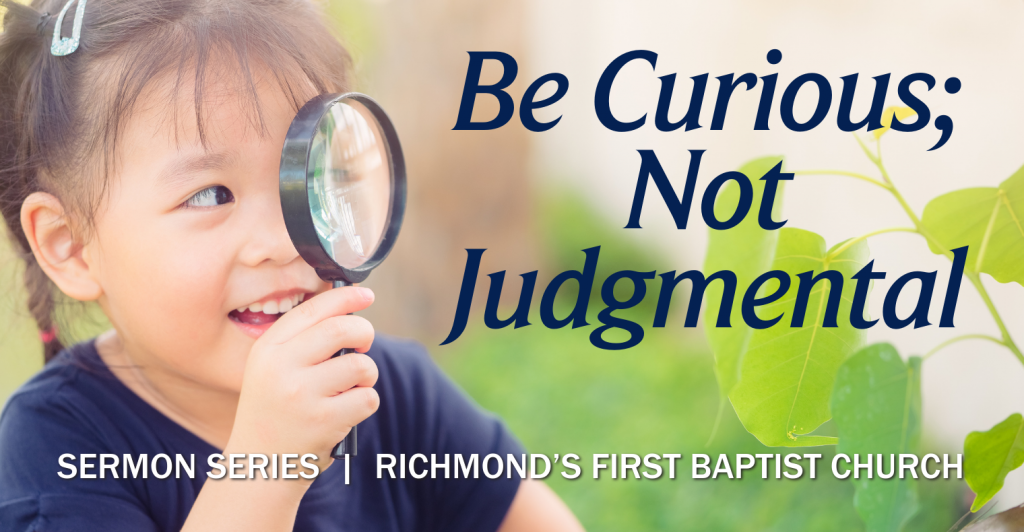 Be Curious, Not Judgmental:

“What Were They Thinking?”

Third Sunday after the Epiphany

As he walked by the Sea of Galilee, he saw two brothers, Simon, who is called Peter, and Andrew his brother, casting a net into the sea for they were fishermen. And he said to them, “Follow me, and I will make you fish for people.” Immediately they left their nets and followed him.

Today’s Gospel lesson is the story of how those first disciples dropped everything to follow Jesus, and it may be the perfect passage for this series, where we are trying to be curious and not judgmental.  Because it would be easy to judge.  It would be easy to say, “What were they thinking!?  How could they walk away from their homes, their jobs, their lives, their loved ones, to follow someone they had only just met?  It doesn’t seem very responsible!”  But if we can stay curious, then the question becomes an actual question: “What were they thinking?  What was going on inside their heads that made it possible for them to walk away that day?”  Because there are things we probably need to walk away from, and things we probably need to walk toward, but for whatever reason we haven’t been able to do it.  We would love to know what those disciples were thinking.

We’ll get to them, but let’s begin with Jesus.  In the opening verse of today’s reading he hears that John has been arrested and “withdraws” to Galilee.  That’s an interesting word, withdraw.  It comes from the same Greek word that is used when Joseph is warned in a dream to take Jesus and his mother and flee to Egypt.  It is used of those who, “through fear, seek some other place.”  I can’t imagine Jesus being afraid of anyone or anything, but maybe he didn’t want to end up like John, maybe he knew it wasn’t time for him to be arrested—not yet.  And so he withdrew from that region down around the Jordan River where John had been baptizing and came to Galilee.

But he didn’t come back to his hometown and that makes me curious.  Why not?  Why didn’t he set up shop in Nazareth?  Why did he go to Capernaum?  Matthew has an answer: he says it was to fulfill the prophecy of Isaiah: “Land of Zebulun, land of Naphtali, on the road by the sea, across the Jordan, Galilee of the Gentiles…the people who sat in darkness have seen a great light, and for those who sat in the region and shadow of death light has dawned.”  For Matthew Jesus is that great light, and it makes perfect sense that he would go to the darkest place he could find: Galilee of the Gentiles, a place Isaiah calls “the region and shadow of death.”  But there’s another line in that prophecy that may be even more relevant.  It’s the line about “the road by the sea.”  Did you know that the Via Maris, the ancient highway between Asia and Africa, ran right through Capernaum?  Strategically speaking, if Jesus wanted to get his message out to the whole world he couldn’t have found a better place than Capernaum, where he could stand by the side of the road and preach to the whole world as it passed by.

There is actually a moment in this Gospel when the disciples of John the Baptist come to Jesus because John is in prison and he wants to know if Jesus is the One to come or if they should look for another, maybe because his ministry is so different from John’s or so different from what John was expecting.  But Jesus says, “Go and tell John what you hear and see: the blind receive their sight, the lame walk, the lepers are cleansed, the deaf hear, the dead are raised, and the poor have good news brought to them.”  He says it as if it were proof that he is, in fact, the One to come, as if these were exactly the kinds of things the Messiah should be doing.  “And blessed is the one who takes no offense at me,” he says, finally.  Maybe another way to say it is, “Blessed is the one who can say yes to this way of bringing heaven to earth.”  And that brings us to those four fishermen.

In verse 18 Matthew tells us that as Jesus walked by the Sea of Galilee he saw two brothers, Simon, who is called Peter, and Andrew his brother, both of them waist-deep in the water doing what they had been doing all their adult lives.  I love the way Matthew explains that they were casting a net into the sea, “for they were fishermen.”  Yep.  That’s what they were.  Like it or not.  But along comes Jesus and says, “Follow me, and I will make you fish for people,” and the world turns upside down.  Their world, at least.  Without a word they drop their nets, wade out of the water, and begin to follow him.  A hundred yards down the shore he sees two other brothers, James and John, the sons of Zebedee, in the boat with their father mending their nets.  He calls them and immediately they jump out of the boat, leave their father behind, and begin to follow Jesus.

It’s not wrong to be a little judgmental at this point in the story, to ask, “What were they thinking?”  I’m sure Zebedee was, standing up in the boat and shouting after them, “Hey!  Where do you think you’re going?”  They had work to do.  They had mouths to feed.  Peter, at least, had a wife (we know this because in one of the Gospels Jesus heals Peter’s mother-in-law, and in my experience you don’t usually have one without the other).  But what if, instead of being judgmental, we could stay curious?  What if we could ask those disciples what they were thinking?  What’s your best guess as to what they might say?  I don’t know that I have any of the right answers, but I have plenty of good guesses.  Are you ready?

Now, maybe none of these educated guesses has answered the question of what those first disciples were thinking, but I’m moving on.  I’m going to be curious, not judgmental.  I’m not going to decide that one of those is the right answer.  I’m not going to pretend that I know what those disciples were thinking.  But I am going to ask another question: not what were the disciples thinking but what was Jesus thinking?  Why would the Son of God—who could preach the Good News of the coming Kingdom like nobody else, who could teach people what the world would be like when God finally had his way, who could cure every disease and every sickness among the people—why would somebody like that need four fishermen?

I have an idea.

When I came to First Baptist in 2008 our mission was to “make disciples.”  That’s a solid mission statement.  It comes straight out of the Great Commission in Matthew 28 where Jesus tells his followers to go into all the world and do what?  “Make disciples.”  But then I began to ask around.  I said, “Suppose we were successful in that mission.  Suppose that fully formed, fully functioning disciples were rolling off the assembly line every day?  What would they do?”  And I didn’t get a lot of good answers.  The most common answer was that they would make more disciples.  I remember thinking that a fully formed, fully functioning coffee maker doesn’t make more coffee makers, it makes coffee, but I didn’t say that.  I just spent a little more time thinking about the word disciple and what it means.

In Greek the word is mathetes, and it means “learner.”  As I thought about it I thought about the way Jesus must have learned the work of carpentry, and I began to think that a better word would be apprentice.  Can you picture Jesus as a boy, sitting in Joseph’s carpenter’s shop, watching him work?  At some point he might have asked his abba to teach him how to do what he was doing.  Joseph would have started with something simple, like a doorstop, would have shown Jesus how to measure twice and cut once, but then he would have watched him while he did it and eventually let him try it on his own.  I think that’s what Jesus was doing with the disciples.  I think he called them into an apprenticeship.  But instead of teaching them the work of carpentry he was teaching them the work of the Kingdom.  Because bringing heaven to earth is too big a job for any one person to do by himself, even Jesus.  He needed help.

By chapter 10 of this Gospel he’s ready to let the disciples try it on their own.  He gives them authority over unclean spirits, to cast them out, and to cure every disease and every sickness.  And then he says, “As you go, proclaim the good news, ‘The kingdom of heaven has come near.’ Cure the sick, raise the dead, cleanse the lepers, cast out demons.”  In other words, he sends them out to do exactly what he has been doing.  In Luke’s Gospel, when he sends them out to do the same thing, the disciples return with joy, because the work of the Kingdom is joyful work!  Why would anyone want to do anything else?

I can’t speak for the disciples.  I can’t tell you what they were thinking.  But I can speak for myself.  Back in 1984 I was working as a graphic artist.  It was good work and I enjoyed it.  I had actually gone into business for myself and was making more money in less time than I ever had before.  But one night my father-in-law, who was also my pastor, took me out for a steak dinner.  While we were there he said, “Have you ever thought about going into the ministry?”  “No,” I said, trying hard not to laugh.  “Never.”  But once he said it I couldn’t stop thinking about it.  I prayed about it; I read my Bible searching for clues; I talked to anyone who would listen.  A few weeks later I was in church on a Sunday morning—in worship, mind you, where anything can happen—and a woman stood up and played a song on a guitar.  I don’t even remember what the song was, but I remember that as she sang I felt released from all other obligations.  I felt free to do what my heart wanted to do.  At the end of the service I got up from where I was sitting, walked down the aisle, and told my pastor I was ready to go into the ministry.  My wife, Christy, was sitting beside me when it happened.  I didn’t tell her what I was going to do.  She must have been wondering, “What is he thinking?”  I’m not sure I could have told you myself.  But it was as real for me as it was for those disciples that day.  It was as if Jesus was calling,

And I couldn’t say no.

[i] Brian Blount, “Look at These Fools!” A Sermon for Every Sunday, January 22, 2023 (https://asermonforeverysunday.com/sermons/a09-third-sunday-after-the-epiphany-year-a-2023/).