More from this service 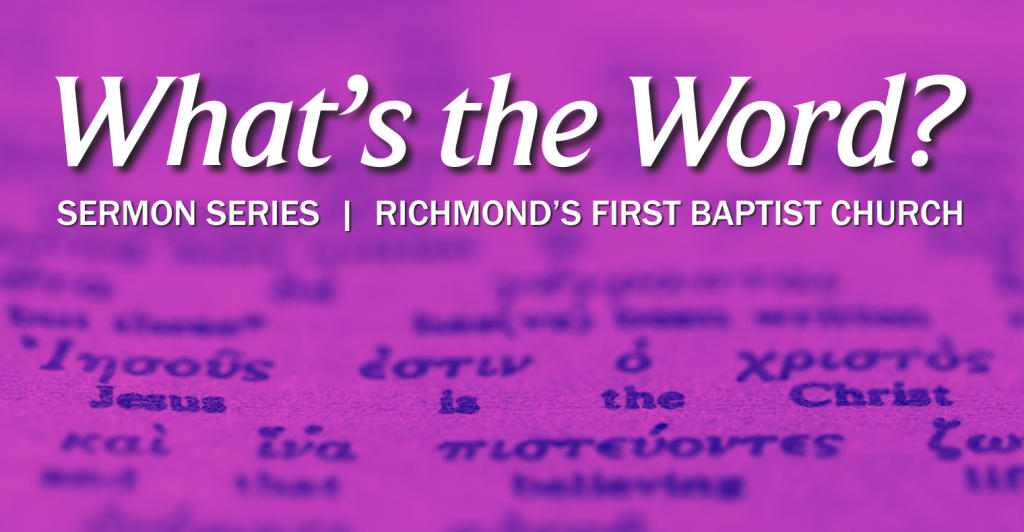 The wilderness and the dry land shall be glad, the desert shall rejoice and blossom

“Go and tell John what you hear and see: the blind receive their sight, the lame walk, the lepers are cleansed, the deaf hear, the dead are raised, and the poor have good news brought to them.  And blessed is anyone who takes no offense at me.”

December 1, 2022:  Dear Diary: I saw the strangest thing today.  Christy and I went for a walk in the neighborhood, and at one point we stopped to admire someone’s front yard.  I said, “Wait a minute: isn’t that an Azalea bush?”  She said it was.  I said, “But it’s December.  Why is it in full bloom?”

December 7, 2022:  Dear Diary: I was walking home after my Wednesday morning workout with one of the other people in my group when I noticed the trees that had been planted behind the Museum of History and Culture back in the spring.  I said, “Hey, aren’t those cherry trees?”  She said they were.  “Then why are they blossoming?” I asked.  “It’s December.”  We went a little closer to see if they were artificial trees, but no, when I plucked at one of the blossoms it came away between my fingers: small, and pink, and fragile.

December 8, 2022:  Dear Diary: Today was my day off.  I went for another walk with Christy, and at the corner of Grove and Tilden I saw a small tree that was covered with fat, green buds.  “Are these buds?” I asked.  “Like buds that are about to open?”  She said they were.  It was strange.  It made me wonder: “What’s going on?  Why is everything budding, blooming, and blossoming in December?”

Those are not the only strange things I’ve seen lately.  Back in November I found an article called, “20 climate photographs that changed the world.”[i]

There were fifteen other photographs in this series, and if you want to see them you can Google: “20 climate photographs that changed the world.”  I don’t know what effect they will have on you, but when I saw them I kept wondering,

The scientists would say that it’s us: that in the past 200 years we humans have burned enough fossil fuels, and piled up enough garbage, and cut down enough forests to upset the delicate balance of nature and throw the entire planet into a tailspin.  But what would they say if the desert should suddenly start to blossom, or if waters should break forth in the wilderness and streams in the desert?  What would they say if the burning sand became a pool, and the thirsty ground springs of water?  Well, I don’t know what they would say, but the Prophet Isaiah would say that’s not us—that’s God!

In today’s Old Testament lesson he speaks to God’s people in exile, in Babylon, 500 miles west of Jerusalem across the burning sands of the Arabian Desert.  If they wondered why there were there he would have told them: It’s you!  You didn’t keep God’s covenant.  You didn’t walk in his ways.  And now you are getting what you deserve: a really, really, long time out.  But God hasn’t stopped loving you.  He hasn’t given up on you.  And if you don’t give up on him then one of these days when you least expect it the desert will burst into bloom; the eyes of the blind shall be opened, and the ears of the deaf unstopped; the lame shall leap like a deer, and the tongue of the speechless sing for joy, because God is going to take his people home.  He’s going to pave a highway through the wilderness, with rest areas every 500 yards.  He’s going to do away with every natural danger and when he does, “the ransomed of the LORD shall return, and come to Zion with singing; everlasting joy shall be upon their heads; they shall obtain joy and gladness, and sorrow and sighing shall flee away.”

And Jesus said, “Go and tell John what you see and hear: the blind receive their sight, the lame walk, the lepers are cleansed, the deaf hear, the dead are raised, and the poor have good news brought to them.  This is the real ‘Messiah’ stuff.  And if you have eyes to see it you can see that God is up to something, and the world is about to change.”  John may not have been able to see it; he was locked up in prison.  But don’t you think those people whose lives Jesus touched had something to say?  “Dear Diary,” they might have written, “Today I met the Messiah.  He opened my blind eyes, he straightened my crippled limbs, he cleansed me of my leprosy, he opened my stopped up ears, he raised me from the dead, he brought me good news, he made a believer out of me, made me believe that God is up to something, and that the world is about to change!  And blessed is the one who takes no offense at him.”

A few years ago I was invited to speak at the Senior Adult Christmas Luncheon, and I told stories about some of the winter adventures I had when I was a boy: about spending the night in a homemade igloo; about going over a ski jump on a pair of strapped-on, secondhand skis; about floating down the river on an ice raft until it broke apart and dumped me and my brothers into frigid, waist-deep water.  “But after those kinds of adventures,” I said, “I loved to come inside where it was warm and cozy, make a mug of hot cocoa and curl up on the couch with a good book.”  My favorites in those days were the Narnia books by C. S. Lewis, and in one of those books a character named Tumnus tells a girl named Lucy about the White Witch, the one who has cursed the land of Narnia, so that it is always winter there and never Christmas.

Even as a boy who loved winter, I could tell what a curse that would be. Lewis was writing as a Christian, of course, and looking for ways to weave the Christian message through this story of four English children who end up in a magical, snow-covered world where animals talk, and where they often talk about Aslan, the Great Lion, who will one day come to break the witch’s spell and undo her evil curse. One of the reasons those books have been popular not only with children but also adults, is because many people live in a world where it can sometimes feel as if it is always winter and never Christmas.

Dr. Steven Garber of the Washington Institute for Faith, Vocation, and Culture remembers reading the Narnia books as a boy.  He says the words, “Always winter but never Christmas,” captured his imagination, that even then he understood them, though now he understands them much more fully.  “At that first reading,” he writes, “they made sense of my life and world, young as I was.  Now I have lived with them, and within them, for most of life, and I feel their weight deeply.  Like every other son of Adam and daughter of Eve, I feel the winter of this weary world.  This week the death of a long friend, and the death of a long marriage; this year the deaths of other friends at moments that seem ‘too soon.’ For every one of us, with our families, our friends, our neighbors, our cities, in every relationship in every way we are burdened by what is tragically not the way it is supposed to be.  And beyond what we see with our own eyes, the day by day onslaught of the news of the world is more often than not a window into a heartache and horror that seem impossible to explain.”[iii]  And yet, as Garber would say, we are believers.  We believe that things are not always the way they appear, and that even when it looks as if the White Witch is winning, Aslan is on the move.

Listen to this excerpt from The Lion, the Witch, and the Wardrobe by C. S. Lewis:

What the children saw [once they had rubbed the sleep from their eyes] was a sledge, and reindeer with bells on their harness. But they were far bigger than the witch’s reindeer, and they were not white but brown. And on the sledge sat a person whom everyone knew the minute they set eyes on him. He was a huge man in a bright red robe (bright as holly berries) with a hood that had fur inside it and a great white beard that fell like a foamy waterfall over his chest. Everyone knew him because, though you see people of his sort only in Narnia, you see pictures of them and hear them talked about even in our world—the world on this side of the wardrobe door. But when you really see them in Narnia it is rather different. Some of the pictures of Father Christmas in our world make him look only funny and jolly.  But now that the children actually stood looking at him they didn’t find it quite like that. He was so big, and so glad, and so real, that they all became quite still. They felt very glad, but also solemn. “I’ve come at last,” said he. “She has kept me out for a long time, but I have got in at last.  Aslan is on the move.  The Witch’s magic is weakening.”  Then he gave gifts to Mr. and Mrs. Beaver and special gifts to each of the children, and just before he left he brought out (I suppose from the big bag at his back, but nobody quite saw him do it) a large tray containing five cups and saucers, a bowl of lump sugar, a jug of cream, and a great big teapot all sizzling and piping hot. Then he cried out, “Merry Christmas! Long live the true King!” and cracked his whip, and he and the reindeer and the sledge and all were out of sight before anyone realized they had started.”[iv]

When I was a boy I loved winter, but I don’t think I would have loved it without Christmas. There’s got to be something more than long nights and cold weather in this world. There’s got to be something to look forward to, something to believe in.  Steven Garber says that it sometimes feels as if we are living in a world where it is always winter and never Christmas.  “But then,” he says, “I know that I have staked my life on something more: that this wounded world, this…broken world, is not the last word. Simply put, I believe in Christmas, and what it is we celebrate when we celebrate its true meaning—God is with us!  Cursed as we are, cursed as this life so often seems, it will not always be winter….  Christmas has come, and is coming…” he concludes, “and I am longing for its blessings to flow far as the curse is found.”[v]

Me, too, Steven Garber.  Me, too.  And when I see Azalea bushes in full bloom in December, and cherry trees covered in fragile pink blossoms, and the little tree on the corner heavy with fat, green buds, I begin to believe that Aslan is on the move, or Christ is coming, or God is up to something we haven’t even imagined yet.

And my heart leaps with joy.

[i] Gabrielle Schwartz, “‘It was like an apocalyptic movie’: 20 climate photographs that changed the world” (https://www.theguardian.com/environment/2022/nov/05/20-climate-photographs-that-changed-the-world)

[ii] I have summarized his remarks.