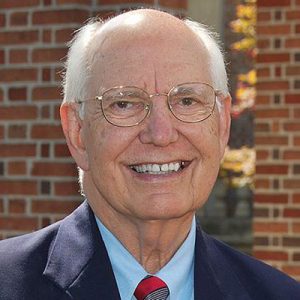 Dr. Peter James Flamming served as senior pastor of Richmond’s First Baptist Church for 23 years, from 1983 to 2006. Dr. Flamming graduated from Hardin-Simmons University in Abilene, Texas and earned both Bachelor of Divinity and Doctor of Theology degrees from Southwestern Baptist Theological Seminary in Fort Worth Texas. Prior to coming to Richmond he pastored several churches in Texas during and after his seminary studies. The most recent of those being First Baptist Church of Abilene from 1966 to 1983.

Dr. Flamming has always had a heart for missions and prayer. He and his wife Shirley led many mission trips around the world and kept close ties to the Foreign Mission Board (now International Mission Board). His heart for prayer and spiritual development has continued since his retirement from the active pastorate as he still meets with and encourages our Catalyst Prayer Team, which seeks to hold up and support our church and her mission in prayer.